A pinch from father

In my first year at High School the Form Teacher thought she'd introduce us to cryptic crossword clues.   (I had already started to do the cryptic version of the daily crossword in  The Sun. I liked that one because there were "two sets of clues but the answers are the same".  Is it still like that?

Anyway, Miss Waller gave a clue which was "A pinch from father".  The answer is, of course, parsnip.  I think of that clue every time I think of that particular vegetable. 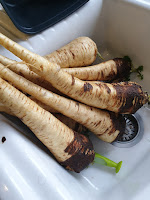 DH dug up the parsnips yesterday (having dug up a few some days earlier to make a years supply of curried parsnip soup).

I said I'd peel and parboil them and freeze them, which I did.  I decided to try parnsip crisps as well, and couldn't remember what I'd done before.

I thought I'd make some notes this time, so I don't have to relearn (again) next year.

Edible.  Like the ones in the bags.  Sort of crisp but sort of chewy.

Attempt 2: stick some of the attempt 1 pieces in the dehydrator to dry them out.  Improved them.

Attempt3:  Cooked (over cooked actually, 3 mins pressure), uncored. 2nd thinnest mandoline  setting (because they went to mush on the thinnest).  Vile,  Too woody.  Too thick

Attempt 6: Cooked (over cooked actually, even though only 1 min pressure), Cored before cooking. thinnest mandoline setting. Not easy to slice. Taste OK

Attempt 7: Put some of Attempt 6 in the fridge, to see if it's easier to slice when chilled.  Didn't get around to doing anything and it's still sitting in the fridge.

Learning for Next Time::