Some weeks ago we had Covid, and had to isolate.  We (I) thought it would be a great opportunity to try and make one of Mum and Dad's preloved-and -not-made-by-them jigsaw puzzles.

DH picked the puzzle, and he picked what looked like the most gloomy and dull one of the small pile.  He found a did the edge pieces, did a bit, and then lost interest.   We did nothing for weeks.

I couldn't get interested in it,  until I managed to do a little group. And then another little group.  And then I attached a group to the edge pieces. WooHoo!   I was only doing a few pieces a day, and  I thought it was going to take me a year to do.

I then started really trying to do it.   I managed to do some quite large chunks.   I bought some stackable catering trays to help me manage all the sorted pieces.

I moaned about it constantly.  It was a boring picture, the colours were dull, it was a nightmare to do.   I was tempted to just give up.

Every time I completed a bit, I did a happy dance.  If I managed to connect stuff to the outside edge, I did a big dance.

One day, I realised that it was actually a really bright puzzle, really colourful and interesting, so much better than the box suggested.   Now I actually wanted to finish it (rather than not wanting to give up)

Towards the end of the non-plain pieces, I found the more  I did, the easier it became.  It was fewer pieces to deal with, and fewer places to put those pieces.

About  12th May, I finished doing all the non plain pieces.  I was sad to find that we had two dark pieces missing.  We move dthe puzzle,  moved out everything under the table, and eventually found one of the two missing pieces.

We slid a piece of hardboard under the puzzle and turned it round on the table so that I could reach the sky pieces.  These photos look odd because the puzzle is upside down, and I've flipped the photos.

All the pieces were plain, so it didn't really matter what the orientation of the puzzle was.

It was really tough doing the last few hundred pieces of sky.  I kept sorting and re-sorting the pieces trying to group them by colour (and by shape).   I looked for pieces that were "different" (manybe they had very wide shoulders, or very narrow shoulders;  maybe they had large holes;  some had strange edges.  Anything that would help me tell the pieces apart.

And yesterday, ithe puzzle was completed.  Apart from that pesky missing piece. 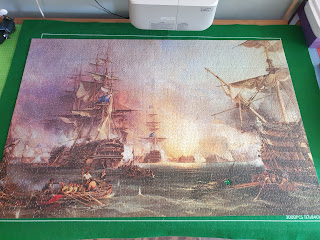 Poor puzzle.  Obviously I can't sell it on with a piece missing, and it's a shame.

But it's done now, and I'll break it up later today.

And then I'll do something else for a while.